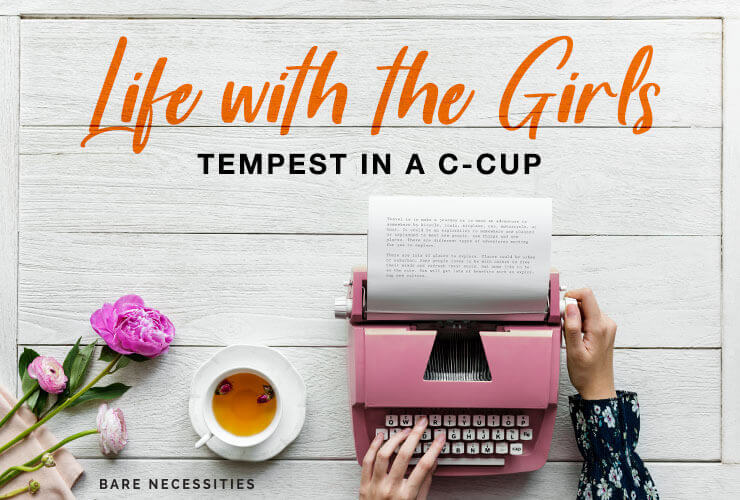 Tempest in a C-Cup

In this month’s “Life with the Girls,” Catherine Censor reflects on a half-century spent negotiating peace with her adversarial breasts: the God-given ones, the surgically-reduced ones and the artificial ones.

My breasts have always been something of a disappointment. Or rather, I have been a disappointment to my breasts. At every stage of my life, we have struggled to coexist.

I developed early and with great enthusiasm. My 34Ds made their appearance just in time for co-ed gym class but years before the invention of the sports bra. Since I was—still am—under five feet tall, my breasts occupied more than their fair share of corporeal real estate, and they were a poor fit in other regards. As a bookish kid, I was mortified to have big breasts, and I’m sure the breasts were equally chagrined that they weren’t affixed to a stripper. 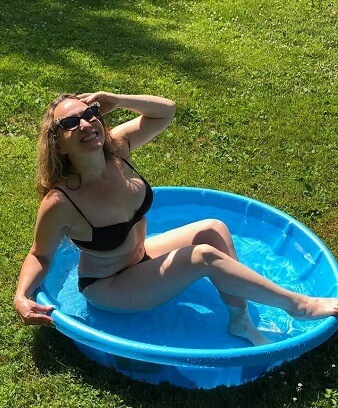 Catherine cooling off in her backyard

In my twenties, after years of binding my chest with multi-row hook-and-eye contraptions that resembled scaffolding more than lingerie, I made the decision to have breast reduction surgery. It wasn’t an entirely satisfactory result. My post-surgical breasts had an oddly square shape and prominent scars. A few years later, when I gave birth to my daughter, I discovered another drawback to my surgically-reduced breasts: They were terrible at producing milk. They frustrated the baby every bit as much as they vexed me.

On the plus side, however, I was now a 34C, which enabled me to wear blouses and cardigans without the telltale button gape. I could also jog without discomfort should the urge ever manifest itself. (It didn’t.)

By the time I turned 40, I was pretty much resigned to the fact that my breasts hated me. Then I learned they were actively plotting my demise. Even though I was in excellent health, a genetic test revealed that I was at very high risk for breast cancer. Unless I underwent preventative bilateral mastectomy, which would substantially reduce my risk, I would require near-constant surveillance: a date with a mammogram or MRI machine every eight weeks, forever. In the decades-long war I’d waged with my breasts, this felt like the final battle.

“By the time I turned 40, I was resigned to the fact that my breasts hated me. Then I learned they were actively plotting my demise”

I know that many women who have faced this same choice really agonize over their decision, but it was an easy one for me. When the plastic surgeon explained that I could have “one-step” reconstruction immediately after the mastectomy and would wake up with implants, the procedure felt doable. When he explained that he could preserve my nipples, eliminate my old scars and give me a very attractive shape in the bargain, it felt like a gift.

The recovery was, frankly, awful. There were surgical drains. Swelling. Pain. But these passed. What did not was the constant, nagging awareness of my “foobs” (fake boobs). I still feel their alien presence under my pectorals every time I reach back to grab the seatbelt or push a laden shopping cart. I feel their weight when I lie on my back and their firm resistance when I roll on my stomach or try to maneuver them into a bra. My foobs don’t move like natural breasts, and they’re mostly numb to sensation. Lacking the insulation of fatty tissue, they’re cold to the touch and, when I drink anything chilled, I can feel the coolness seep through my chest like water trickling down the roots of a houseplant. But I’m cancer-free.

Once the swelling subsided, I discovered that, for the second time in my life, I was a 34D. To fill up the width of my chest and create more “natural-looking cleavage,” the surgeon had used wider, higher-profile implants than we’d discussed during my consultation. My foobs may not look completely authentic, but the perfectly round, gravity-defiant grapefruit halves have their aesthetic merits, especially if you’re a fan of ’80s-era “Baywatch.”

After a lifetime of breast mishaps and struggles, I’m pleased to report that I’m now at home in my own chest. No longer a shy adolescent, I’ve embraced my surprise turn as a walking homage to Pamela Anderson. I look good in clingy knits, pinup-inspired dresses and leopard-print everything. I own who I’ve become, whether through force of will, habit or accident. One day, feeling especially brave, I even bought a T-shirt that says, “Yes, they’re fake, the real ones tried to kill me!” in rhinestones, but I never wore it and now I can’t find it. Although I have two artificial parts, like everyone else, I’m still (mostly) human.

Are you a woman and a writer with a personal story to share? Submit your own “Life with the Girls” essay by emailing blog@barenecessities.com.

Catherine is a writer, editor and content producer, as the corporate folks like to say. Over the years, she’s raised a daughter, run for mayor, sparred in a boxing ring and founded a nonprofit. She’s worked at Redbook, Weight Watchers Magazine and the Vegetarian Times. Born and bred in New York City, Catherine currently lives in the Hudson Valley. She still talks too fast.