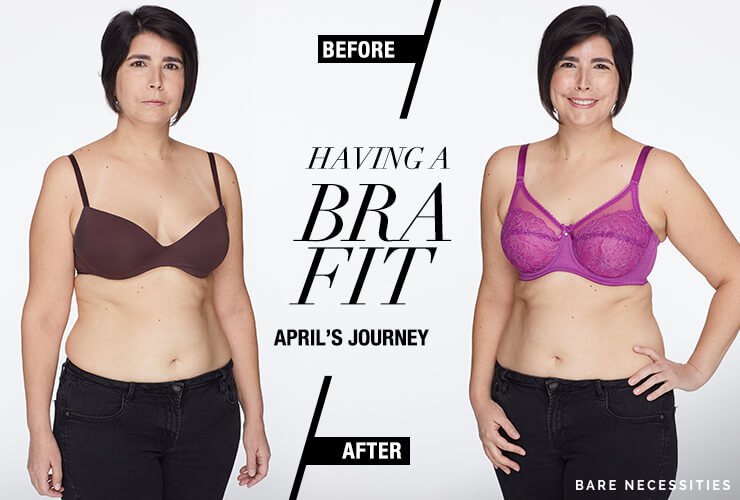 Having a B.R.A. Fit, Health & Wellness

From 38C to 34D, April Salazar Proves Size is Just a Letter

Feeling confident in her own skin is really what April Salazar, 41, was after with this bra-fit makeover: “I’m finally at a place where I feel confident about who I am and where I’m going.” Which isn’t to say getting there has been easy. After more than a dozen fertility treatments, four pregnancies and three losses over the last few years, April gained 65 pounds she’s now in the process of losing.

“My body has been through the grinder. For so long, I didn’t have control over it. I have no idea what size I am,” said April, the managing editor for a technology nonprofit. “With a three-year-old, only now do I feel like I can take time for self-care. I think it’s important that, at any size, I model self-acceptance to my daughter, and I’m afraid I’m not doing that.”

April bonded with Bare Necessities Bra Fit Expert Kristyn over their shared experiences with miscarriage; Kristyn knew firsthand of the mental and physical fluctuations April was experiencing: “It’s tough to keep track of where your body is. Maybe you were a different size before, but we’re going to go by where you are now, and we’re not going to stop until we get it right. We’re going to get you into something that fits.”

Or, as it turned out, a lot of somethings.

BEFORE
When April called Kristyn, she was wearing an old 38C she’d picked up in a Costco two-pack. “I own four bras. I guessed my size. None fit,” said April. “I’d like to find a bra that makes me stand taller, a bra that makes my husband say, ‘Damn.’ I mean, my breasts are superheroes! They’ve been squished into mammogram machines. They nurtured a small child. They deserve better. I like T-shirt bras because I know I’m secure. I don’t like things spilling out, or too much cleavage.”

After reviewing April’s measurements, Kristyn knew she was in too big a band and that seamed bras, not necessarily T-shirt styles, would offer the coverage and support April was after. Her dress size provided clues, too: In a size 10, it made more sense that April would belong in a 34 band, not a 38. “When band size goes up, so does cup volume,” Kristyn explained. “How are you fitting in the cup? Is there spillage or gapping?”

“Oh, horribly,” April admitted. “There’s space inside the cup, especially up top, and my breasts spill to the middle. I spend a lot of time putting them back where they belong.”

Kristyn’s diagnosis: “Wrong all over. Let’s start by bringing down your band size. We want it to be snug, but you have to be able to tolerate the feeling. Once you get used to it, a whole world of options opens up.”

THE REVELATION
At first, Kristyn sent April some Natori and Panache T-shirt bras that, according to the pics she snapped at home with a selfie stick, looked to be a technical fit but didn’t blow anyone away. “April’s breasts seem too heavy for the soft cups,” noted Kristyn as she scrutinized the shots.

Round two consisted of three- and four-part-seamed cups from average and full-bust brands Chantelle, Wacoal, Fantasie and Curvy Kate. Some bra styles worked better than others, based more on trial-and-error than rhyme-or-reason. Lastly, Kristyn went back through hundreds of bra choices on BareNecessities.com to find flashes of color that would bring a little joy to getting dressed. 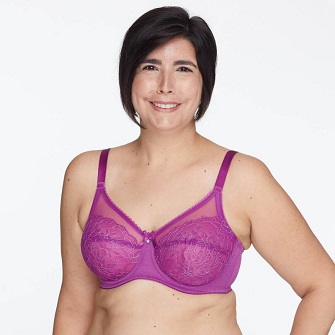 Wacoal turned out to be a winning brand. The seamed, semi-sheer Retro Chic made April look like a vintage pin-up girl with its ever-so-slightly pointed shape and kicked-in straps. It also smoothed her sides and brought her breasts in and up, which slenderized the look of her torso. And the Embrace Lace T-shirt bra gave April the structure she likes in an opaque cup, with a band as gorgeous as it is firming.

Chantelle Rive Gauche fit similarly fabulously. “Though seamed and lacy, the bra lays flat, so it’s not showy under clothes. It gives April a great lift and a rounded look,” said Kristyn.

The Panache Cari spacer bra has all the qualities of April’s beloved T-shirt bras yet with impossibly light, breathable cups, and the plunging Chantelle Courcelles followed April’s contours nicely.

Only after her third, final fitting could April see why bra shopping had baffled her: She fit into a 34D (Retro Chic and Rive Gauche), a 34DD (Embrace Lace) and a 34DDD (Cari, which goes by a 34E UK). April’s band also went down by two full sizes, which was “an adjustment, but I got used to it quickly. Suddenly you realize what you were missing in terms of support. You can physically feel the difference.”

“I love the Wacoal and Chantelle because they’re so delicate. I never would’ve thought I could wear bras like that,” said April. “They make me feel confident and cute.” 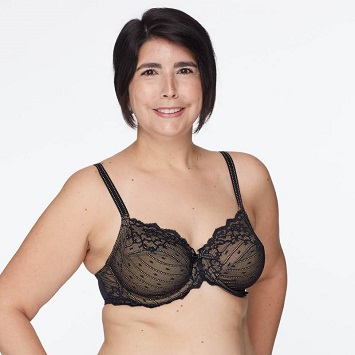 AFTER
“It goes to show you’re never one static bra size,” said Kristyn, who attributed the differences to body shape and how it relates to each brand’s designs. In the full-coverage, unlined, unpadded bras, April took the smaller D cup. Because of the shape of her breasts, Panache’s U-shaped underwire fit her better than many brands’ wider, semicircular wires. These nuances seem so minor, yet they have the ability to derail anyone’s bra shopping.

Per Kristyn: “Just let your Bra Fit Expert handle it for you! Barring that, order the size you think you are and one up and one down, then return what doesn’t fit.”

“It took a little work on my part, but you made it so easy,” said April, who referred to her later rounds of at-home try-ons as “angels singing. It was such a vast improvement. I really had no clue before! I wanted to feel comfortable while looking ready take on the world,” said April. “I’m getting there now. I feel like I’m getting back to me.”