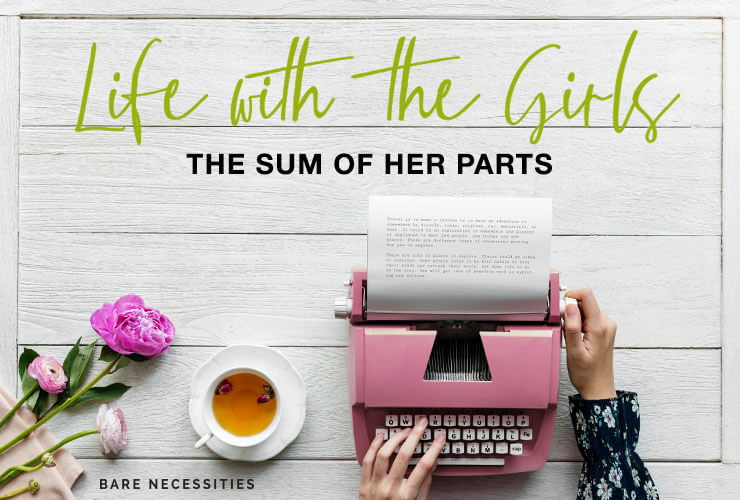 It took getting divorced for Jill Waldbieser to remember that her boobs are far from her greatest asset. In this month’s “Life with the Girls,” Jill finds freedom from a culture that tends to worship women one body part at a time. 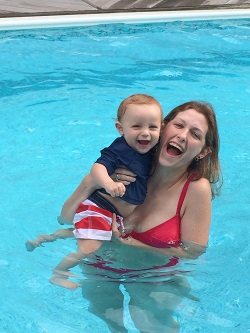 Jill in her maternity bikini

There’s a photo of me in one of my mom’s old albums that’s all tomboy: shaggy blonde pixie cut, scraped-up knees, missing tooth, no shirt. I remember running around like that a lot on humid summer nights, not a care in the world.

I also remember when my next-door neighbor told my mom I needed to start wearing a bra. I was in fourth grade, and despite a steady diet of Judy Blume paperbacks, had zero enthusiasm for bra shopping. I didn’t really develop until 16, but when I did, it was like my body had decided to make up for lost time. My boobs grew so fast, they left stretch marks in their wake. Seemingly overnight, I had to trade my cute, comfy triangle bralettes for heavy-duty underwire.

Grunge was in fashion, so I buried my chest under baggy T-shirts and let an unbuttoned flannel flap around for added distraction. The last thing I wanted was any visible signs of swelling or cleavage. What I had, in my mind, were twin burdens. They made me less aerodynamic, harder to dress, took a lot of time and money to deal with and, for all that, didn’t confer any special benefits that I’d noticed—most people would never have even guessed I was a D-cup.

That changed when I met my (now-ex) husband. He was a quintessential boob guy: the bigger, the better. He worshipped Pamela Anderson. There was no doubt which of my assets he liked best, and as someone who had never been happy with the size or shape of her breasts, that kind of appreciation was refreshing. It was a silver-ish lining when pregnancy swelled my cup size four letters (I didn’t even know anyone made an H) and trying to find a bikini meant a weekend-long deep-dive. The day my milk came in, as I stared at the mirror in stunned disbelief that they could get even bigger—cartoonishly rounder and perkier, too—he just grinned like he’d won the lottery.

Once we had separated and I faced the prospect of dating for the first time in more than 15 years, that old self-consciousness resurfaced with a vengeance. After nearly two years of breastfeeding, my boobs had earned their stretch marks and were sagging for good measure. My ex’s unfaltering adoration had given me a psychic boost at the time, but it had also planted in my head the idea that my chest was my only attractive feature.

I did the logical thing: I went bra shopping. Unlike when I was an awkward teen, finding well-made pieces that really fit eased my worry…until it came time to take them off in front of someone new.

My worry was utterly wasted. The reaction I got was far from negative, but it was equally far from worshipful. I had never even considered that there could be a middle ground, and this seeming indifference to a body part that for so long had been placed on a pedestal, not just by my ex but by society, totally confused me.

In time, I got it. It’s not just that my new partner is more of a butt guy. I could have boobs like Blake Lively and it wouldn’t make any difference. His desire is for all of me, not select body parts. He looks at me the same whether I’m wearing a sweatshirt and glasses or yoga pants and a sports bra. After the brokenness I felt following my divorce, that kind of acceptance made me pause and reevaluate. And I decided that my boobs don’t define me one way or the other. They’re part of me, and I’m not embarrassed by them, but I’m also not reliant on them for self-confidence or sex appeal. I’m proud they fed a human, happy they give me pleasure and relieved that they’re healthy and still in roughly the right place. And this is the most free they’ve been—I’ve been—since I ran around the neighborhood, shirtless and wild in the summer of my youth.

Jill Waldbieser is a writer and editor specializing in health, wellness and food. She lives, cooks and occasionally whitewater kayaks in northeastern Pennsylvania. She still owns a maternity bikini even though her son is now in Kindergarten.