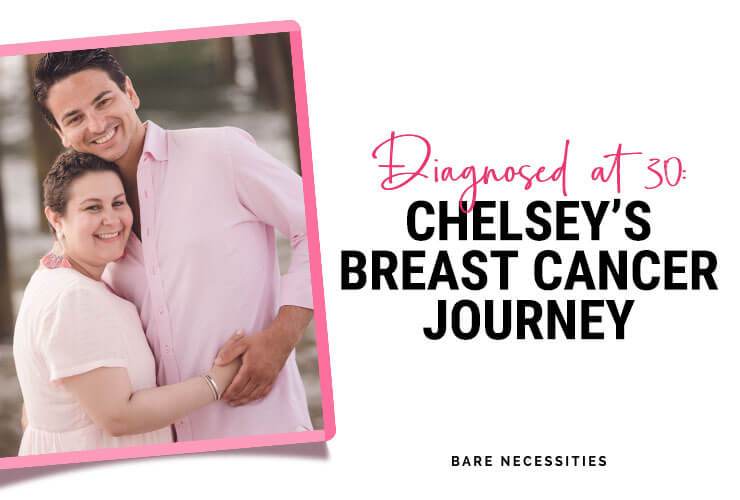 Breast cancer is nothing if not personal, and the net it casts is wide. There are more than 3 million women with a history of breast cancer living in the US, according to BreastCancer.org in 2019. They’re our colleagues, our friends and, in this case, our family.

In honor of Breast Cancer Awareness Month, I got personal with my cousin Chelsey Goldman, a 30-year-old office administrator, wife and mom to daughter Abigail, 4, and son Rory, 3. One year and 6 days from her diagnosis, she has beaten the disease. Still, there is a ways to go to get back to life B.C. (before cancer). She opened up to Bare Necessities about what it’s like to wonder if you’re going to live to see the day your kids start school.

Q: How did you learn you had breast cancer?
A: Mid-September of last year, I was getting ready to shower when I felt a pea-sized lump in my right breast. I watched it for a few days to see if it would go away, but it didn’t. I called my general practitioner, and he told me to give it another week or so. After that, he wrote me a prescription for a mammogram.

I didn’t think much of it except that I was younger than everyone else in that waiting room. The technician gave me the mammo and told me not to leave. The radiologist came in, said she was very concerned and that I needed an immediate biopsy.

In an instant, my world crumbled. I have a family history of breast cancer but at my age, this wasn’t on my radar. No one ever talked to me about genetic testing or early detection.

After several biopsies and MRIs, I was diagnosed last October 1 with BRCA2 Stage 2B node-positive breast cancer. When they called with the results, I was in the middle of a photo shoot with my kids. My first thought was, ‘I want to see them grow old.’

The initial fear and shock morphed into faith and determination. Within a week, I was getting a port put in and on October 15, I had my first chemo treatment.

Q: Apart from everything you experienced physically, what did you go through mentally?
A: That first week was difficult in trying to figure out who to tell. I didn’t want to alarm people, and I didn’t want people to bother me. Once I got a team and a plan in place, we shared the news.

It was all so hard to grasp. I’ve had dark times before but came through them. I already knew I was capable of anything and had that deep-seated faith that I was going to be taken care of and protected…but I was completely wiped. The toughest thing was not being able to pick up my kids, put them to bed or even hug them at times. I was so depleted that I couldn’t be a mom for a while. I had to explain, “Mommy has a boo-boo on the inside, and it’s called cancer.”

Q: What was your treatment plan?
A: Breast cancer isn’t black and white; each person and diagnosis are different. I trusted my doctors completely and went for a more radical treatment plan. I did 12 rounds of AC-T chemotherapy with three rounds of Carboplatin for added reassurance. Chemo is like childbirth: It’s so crazy when you’re going through it, but when you’re back home, you forget how daunting it really was. I’m just getting out of the chemo fog. The most painful part was the shots the next day to increase my white blood cells. My bones ached so badly, I couldn’t even roll out of bed.

That was followed by a bilateral mastectomy and 25 rounds of radiation. They did a pretty dramatic mastectomy, with lymph nodes, for my 5-foot-tall frame. Radiation was my job for five weeks; I finished in July. I did a very large surface area to get any residual cancer cells that could still be in my body. It went from the middle of my chest, past my armpits, up and over my shoulder blade. It wasn’t until the third week I started to feel the burn. My skin turned black; it felt like someone had poured boiling water on me. I used steroid cream, My Girls cream and baking powder to reduce friction. Now it looks like I have sunspots in those areas but if it gets me one more day alive, it’s worth it.

Since my cancer was hormonally driven, I have plans for an ovariectomy [the removal of the ovaries and Fallopian tubes]. I had hormone replacement therapy after the mastectomy: monthly injections to shut off my estrogen. Well, my ovaries did not want to go into menopause. We maxed out the dosage. Since I’m still producing the estrogen that caused the cancer, there’s always a fear of recurrence, so I’d rather get them removed sooner than later.

I’ll have a DIEP flap reconstruction surgery in April, and hopefully that will be the end of it. Right now, I have tissue expanders, which are basically hollow implants. Weekly for six weeks, the plastic surgeon gradually filled them with saline. My body changed so much. I went from a DD-cup pre-mastectomy to flat-chested to a B-cup with the expanders.

Learning to accept my scars is taking time. The tissue expanders don’t look like traditional boobs. I have almost no sensation in my chest area and underarms, which surprised me. After that, it’s about aesthetics.

Q: What was it like to endure?
A: Getting comfortable with being sick was the most challenging part. It was very hard when I started going bald. I went to a fancy wig shop, had three fittings, paid $600 and when I walked out it was like Samantha in Sex and the City—I didn’t feel authentic. I put it back in the box and never wore it again.

In the beginning, I was like, why me? I worked so hard to live a healthy lifestyle, eat well, be a good person, do everything right. But then I realized, why not me? May it happen to strong people who won’t let it destroy them. I’m grateful to have family, friends and resources when others don’t.

It’s such a mixed bag of emotions. I’m proud of my body—it carried two children and brought me safely through a massive surgery—but I’m the heaviest I’ve ever been. I had no breasts. I have new breasts. Every six weeks, my body is different. When I’m strong, I try to walk. When I’m tired, I give myself a bit of grace. Though I’m uncomfortable now, I know it’s not forever.

Q: Where did you find support?
A: My husband, Isaac, has been a rock. I don’t think I consciously understood the vows I read on our wedding day at 24 years old, but as I fought for my life at 30, it all made sense. He works incredibly hard to provide for our family and travels all the time for work, and he just stopped. He came to every single appointment, asked questions, did the drop-offs and pick-ups and birthday parties…he totally took over and allowed me to be sick. Same with my parents and in-laws and sister and sister-in-law who made an effort to be there when I needed them.

When I had to let people know or ask for a favor, the support was overwhelming. The daycare director would feed them dinner. Isaac’s coworker’s wife sent me the hair products and scarves she used when she went through this. A mom from daycare put together a chemo bag for me with things like socks, lip balm and snacks. It was so thoughtful because I actually used it all, and she showed she cared without being too invasive. Gift cards were also super helpful to my family.

I found communities of people online sharing their experiences. It helped me so much by answering the questions I didn’t want to verbalize. I wanted to know what I was going to look like and feel like. The hospital had many resources, but it was through social media that I found solace in reading about others’ journeys. I started following @the_breasties on Instagram. It was founded by young women affected by breast and reproductive cancers. They have created such an amazing outlet for previvors, current warriors and survivors to share their stories. They have free retreats and amazing events I hope to attend one day.

I created a private Facebook page to update people who wanted to be involved but weren’t necessarily texting friends. So many people from every stage of my life have come together in this virtual place. I’m glad that I have these days documented somewhere.

Q: When did you get the all-clear?
A: After radiation was complete, I got the all-clear and released a lot of the tension I was holding onto. Now I’m closely monitored by my oncologist and have routine blood tests and follow-ups. I still have a lot ahead. While I’m in the clear and take every preventative measure outlined by my doctors, I’m still afraid of reoccurrence. Have I “beaten” cancer? I guess so, but I still wake up every day feeling like I’m fighting for my life.

Q: In what ways has breast cancer changed your life?
A: It’s made me more conscious of the things that matter. It’s helped me learn to accept help. It’s taught me to let go of what doesn’t serve me. I try to live each day in a state of gratitude and faith.

Q: What advice would you give other young women?
A: Listen to your body, and advocate for yourself. Check your breasts once a month. The Breasties call it “feel it on the first.” If you have a family history, you’re eligible for a genetics panel. Most hospitals have a genetic specialist on staff to answer questions. Ask your general practitioner or OBGYN about starting mammograms early.

Q: After all your chest has been through, how do you feel about it?
A: I look at my foobs [fake boobs] as a work in progress. It took time to be able to look in the mirror. I started to think of my scars as battle wounds. They helped save my life and gave me the gift of more time.

I started wearing bras at 12 years old; now, most days I don’t wear one at all. It’s been a strange transition. Buying bras used to be so important, so it’s weird to go from one extreme to the other. With the tissue expanders, anything with underwire or structure is pretty uncomfortable so when I wear one, I choose a soft post-mastectomy bra with no underwire and removable cups.

Q: For those of us who know someone with cancer, what are some genuinely helpful things to do or say?
A: Let them know that you’re there to support them if they need, but allow them space to process and grieve alone if that’s what they want. Friends would just say, “I’m bringing dinner Tuesday, what do you want?” They handled everything. By taking charge, it helped lighten the load without me having to ask for help.

Q:  What do you wish you could tell yourself at the start of this journey that you know now?
A: You are stronger than you know, and you will be okay.

Have a breast cancer story of your own to share? We want to hear it. Email us at blog@barenecessities.com. 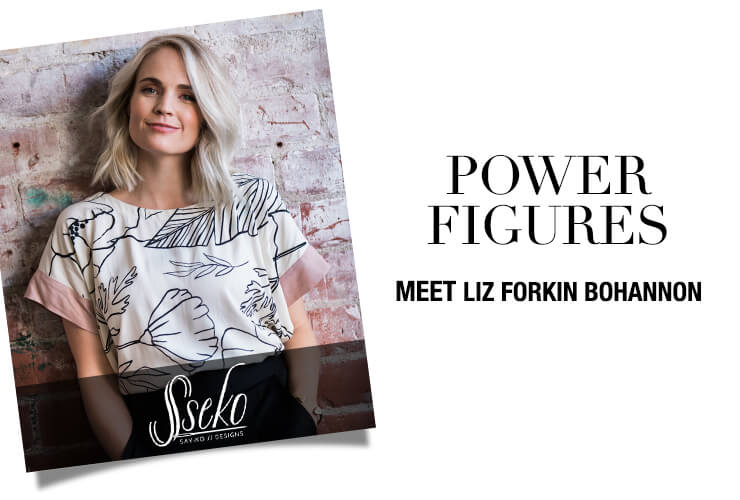