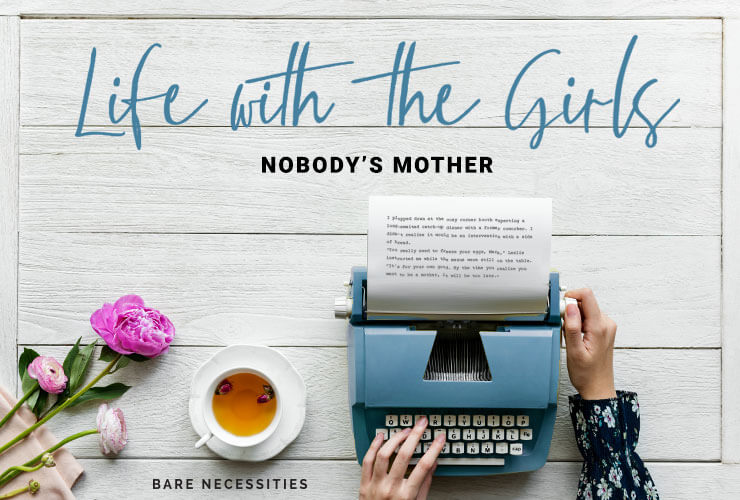 Mara Reinstein has become many things in her 40ish years—a writer, film critic, satellite radio host, world traveler, friend, auntie—but one thing she never longed to be called was “mom.” Hear what it’s like to choose to defy the greatest enduring expectation of women in this month’s “Life with the Girls.” 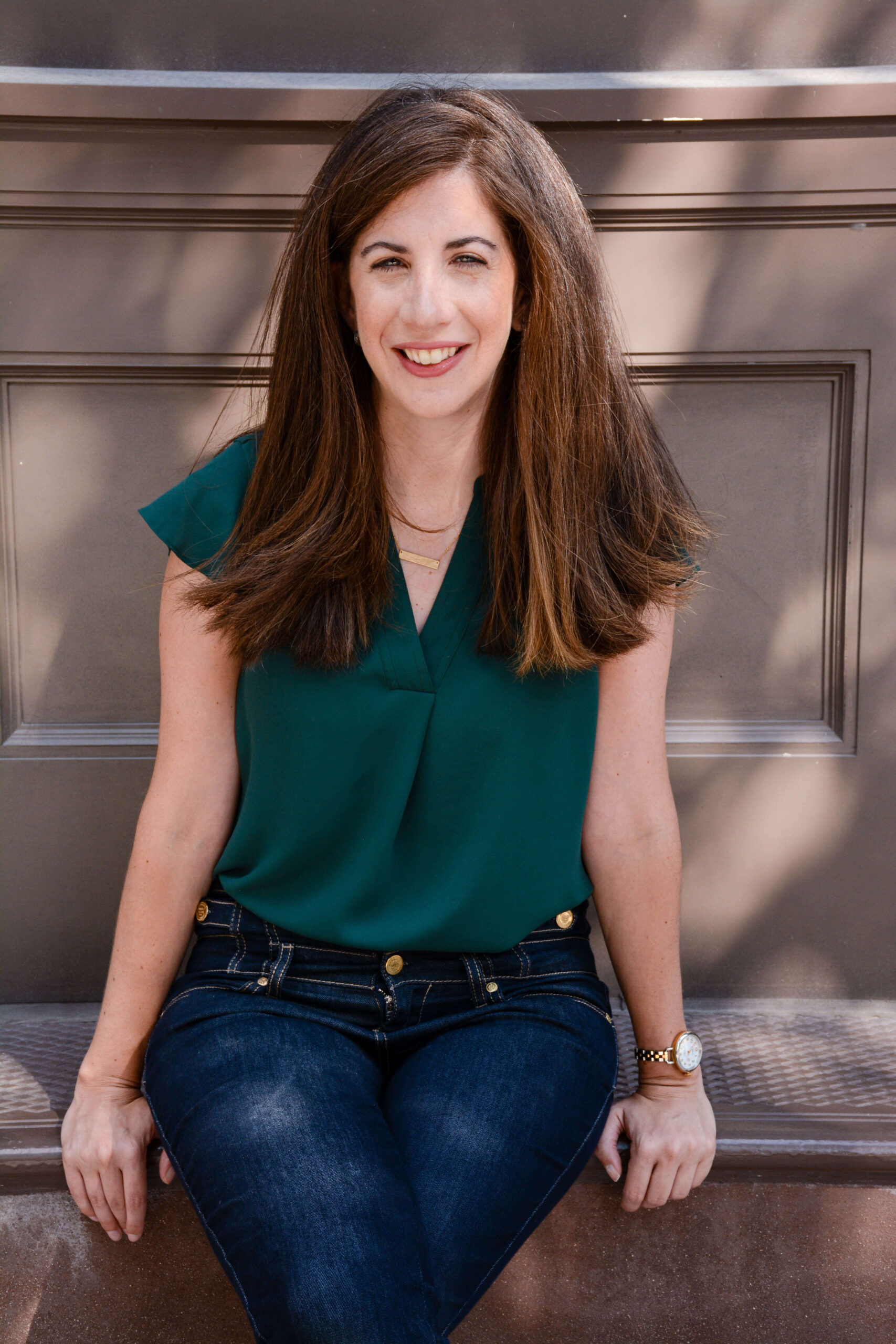 Mara on a stoop of her own

I plopped down at the cozy corner booth expecting a long-awaited catch-up dinner with a former coworker. I didn’t realize it would be an intervention with a side of bread.

“You really need to freeze your eggs, Mara,” Leslie instructed me while the menus were still on the table. “It’s for your own good. By the time you realize you want to be a mother, it will be too late.”

Leslie had been struggling with fertility issues, so I know she had the best intentions. That’s why I listened and nodded politely and deftly attempted to change the subject. I just didn’t have the heart to reply with the thought that instantly formed in my brain: “Look, I know I’m only 36, but that’s not happening. I’d rather spend all that money on my next trip to Europe.”

Now that I’m in my mid-40s, I can say it proudly and hopefully without judgment from others: Motherhood is not for me.

That’s a hard pass on cleaning up bodily fluids, helping with homework, running a kitchen, waking up before dawn and having the patience of a farmer in the spring all for the sake of being called “mom.” That’s just the small stuff! In the big picture, I do not want to be a primary caregiver who’s responsible 24/7 in perpetuity for any life that is not my own. I can’t even commit to raising a Chihuahua, let alone a child.

“I can’t even commit to raising a Chihuahua, let alone a child”

Mine is not a sorrowful, she-must-have-been-raised-in-a-broken-home story. I grew up addicted to ’80s sitcoms like Family Ties, Growing Pains and Happy Days because these shows mirrored my own goofy, good-natured suburban family. Baby rain or shine, all the time, we got each other, sharing the laughter and love, blah blah, blah. As such, I always assumed (dare I say was programmed?) that I would follow the prototypical path of settling down in a leafy neighborhood at an appropriate age and raise cute, wisecracking kids. I’d be the can-do, caring mom with a career and a mortgage.

Looking back, I can’t pinpoint the defining moment when that plan took a hard left. Certainly, moving to Manhattan straight out of college was a surefire sign that I wasn’t going to immediately follow in my mom’s sensible-loafer footsteps. But many of my friends also started out in shoebox-size apartments and now set several places at the kitchen table.

I unofficially started reprioritizing when I logged ridiculously long hours as a staffer at a weekly celebrity magazine throughout my 20s. While my friends felt a sense of maternal duty waking up at 3 AM for bottle feedings and bad-dream reassurances, I felt a surge of adrenaline closing a breaking-news story at the same hour on a deadline night. It’s fair to conclude I was more comfortable writing about Angelina Jolie’s expanding family than starting my own.

Becoming an aunt in my 30s cemented my position. I obsessed over my adorable nephew, Ryan, flying back to Michigan every chance I could get just to rock him for a few hours. I was there when he lost his first tooth and blew out his first birthday candles. But when his shit almost literally hit the fan, I yelled for my brother and sister-in-law and high-tailed it into the next room. He cried all the time, drowning out the sound of my biological clock. I wanted no part of this side of parenthood.

As a special upside, Ryan and I bonded big time because I was the cool auntie who treated him like a prince and never punished him with time-outs. To this day, Ryan—as well as my niece, Leah—runs into my arms and gives me a huge hug when I walk into a room. He doesn’t even look up from his phone to make eye contact with his parents when they do the same.

Even better, I get to maintain my blessedly independent life. I continue to keep strange, strenuous hours, often sitting in front of my laptop well past midnight. I’m prone to taking disturbingly long naps on Saturday afternoons after going on my 6-mile runs or bike rides. I still eat cereal for dinner when I’m too lazy to pick up takeout or turn on my stove. I check my phone like a madwoman because I’m a freelancer, scared to miss an email. In non-pandemic times, I’m a one-person mobile unit who travels almost every other weekend both for work reasons and mini getaways: The woman who checks in passengers at the Delta Airlines Sky Club lounge at LaGuardia Airport knows me. I’ve been to the South Pacific 11 times since 2004. Last year, I seriously dated a guy who didn’t even live in the tri-state area.

I realize it all may sound deeply idiosyncratic, chaotic and peculiar. But it’s the existence I built for myself, and I love it more days than not. Nowhere in that description does a child fit in and, frankly, I’m not willing to sacrifice it. Some may call it selfish; I call it knowing myself to the highest degree and accepting myself for it.

On bad days, I admit that I can fall into the trap of seeing photos on social media and believing that everyone from my distant cousins to the girls in my high-school French class are living their best lives because they became domesticated. Look at them raising munchkins dressing up for their first days of school! And saying precious, hilarious things! And celebrating fun milestones galore!

I know most of them are truly happy, but I also know that happiness is not a one-size-fits-all proposition. I want to watch a Broadway show, not sit through a marathon dance recital. I want to go out and party for hours on New Year’s Eve, not debate when to come home and figure out what’s for breakfast the next day. Just kidding: What I really want to be able to do is stay in and sleep until 11 AM. And I can.

The craziness that is COVID-19 has only underscored my feelings. In 2020, it seemed like all the fun benefits of parenthood were stripped away. What’s left during such a tenuous time? It looked to me like the stress of also serving as a teacher, disciplinarian, IT expert, doctor, short-order cook and chauffeur on a budget, with no breaks. I can’t fathom it and hold the highest respect for everyone enduring it. That includes my own parents, who let their middle-aged daughter hunker down with them for six months while New York City remained a hot spot. One night, I was so sick to my stomach that my mom ran out to Costco at an ungodly hour to buy me extra-strength Pepto Bismol, as if it weren’t obvious to me before that parenthood has no finish line.

There’s a line in Sex and the City that I think about a lot. It’s one of the final episodes, when Carrie and Charlotte, now both 38, are at a playground discussing their futures. Charlotte is convinced that her friend is going to be a mom soon and is just waiting for the right guy to come along. Carrie replies with an admission: “If I really wanted to have a baby, wouldn’t I have tried to have one by now? I wanted to be a writer, I made myself a writer. If I want a ridiculously extravagant pair of shoes, I find a way to buy them.”

That’s what I really should have told Leslie in that booth. Fact is, I lack maternal instinct. It doesn’t make me any less fulfilled or complete. I’m still compassionate, wise, nurturing and a fantastic babysitter.

The big difference is that I then get to go home to my own place, fix a bowl of cereal and enjoy the silence.

Mara Reinstein is a New York City-based film critic, entertainment journalist and writing instructor who contributes to Parade, Emmy Magazine, Us Weekly, Architectural Digest, Billboard and more. She also hosts "Sound & Vision" every Monday night on SiriusXM Volume and quotes The Devil Wears Prada on a daily basis. Read about all of the above at MaraMovies.com.